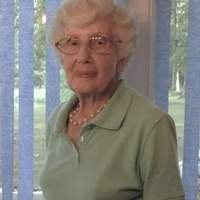 Arlene Dessaree Greenwell Hurt was born September 17, 1923, to Asa Herbert Greenwell and Mary Valeria Ragan Greenwell, at home on Richland Creek near McEwen, TN. She grew up in McEwen and married John Hurt on September 8, 1944. They were married for 62 years until John's death in 2007. Through those 62 years, she traveled to every state in the United States including Alaska and Hawaii, as well as Canada, Mexico, the Caribbean, Germany, Switzerland, and France. She especially liked going with family to the beach in Florida. After John's retirement from the United States Navy in 1959, they returned to McEwen, and built the first split-level house in McEwen on 40 acres of land. Arlene was primarily a stay-at-home mom, but occasionally worked as a substitute school teacher, kindergarten aide, and dress shop clerk. She was also a Cub Scout den mother, Little League mom, PTA mom, and Sunday School teacher. She was a charter member of the Humphreys County Museum, a member of the Humphreys County Historical Society, and a lifetime member of the USS Enterprise CV-6 Association.

Arlene was a dedicated walker. Motivated by a mild heart attack in 2003, she began walking for better health as well as fun. She totaled several hundred miles a year and was still walking 2 to 3 miles a day at age 92. It was estimated that she walked over 5,600 miles over 14 years. Getting older in no way slowed her down.

Family was the center of Arlene’s world beginning with the time she was a child and continuing to the present. Her family and friends will remember her as an incredibly loving and giving spirit who made her home and heart open to all. Those of us left behind will miss her sweet presence in our lives but celebrate her life and the time we had with her.