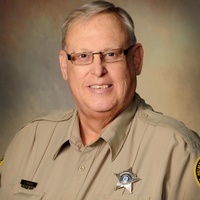 Mr. Danny Warren age 65, of Waverly, TN passed away Monday, May 21, 2018. Mr. Warren was born October 11, 1952 to the late Billy Joe Warren and Mattie Lee Allen Warren. Danny was a Deputy Sheriff for the Humphreys County Sheriff’s Office for 38 years. He was married for 45 years to Debbie Tittle Warren.

Along with his parents, he was preceded in death by his:
Son Rick Jones, Father-In-Law Walker Tittle, Sister-In-Law Cindy Tittle Garber, Nephews Evan and Adam Garber, Nephew Tony Rickard.

Visitation with the family will be Wednesday, May 23, 2018 from 1-4pm at Luff-Bowen Funeral Home in Waverly. Funeral service for Danny Warren will be Wednesday, May 23, 2018 at 4:00PM conducted by Mark Beechum and Dale Caudle. Cremation will follow at Richlawn Crematory in Waverly.
To order memorial trees in memory of Danny Warren, please visit our tree store.