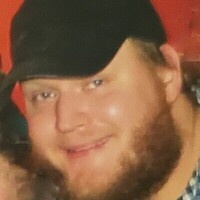 Mr. Dillon Carter Lane, age 37 of McEwen, Tennessee, passed away Thursday, July 8, 2021 at Tri-Star Horizon Hospital in Dickson. Dillon was born February 20, 1984 in Nashville, TN to Terry Lane and Anna Wallace Lane. He married Kariesa McKlemurry Lane June 14, 2008 and they had two children, Cambria and Ethyn. Dillon worked for Bridgestone APM in Dickson as a Quality Technician. He was a family man and enjoyed spending time with them. He loved playing the drums, painting miniature figurines, and tabletop games with his children and niece.

Visitation with the family will be Sunday, July 11, 2021, at Luff-Bowen Funeral Home in Waverly from 3pm to 7pm. No funeral service to follow.

He leaves to cherish his memory:

One daughter, Cambria Lane of McEwen

One son, Ethyn Lane of McEwen

Father-in-law and Mother-in-law, Kenneth and Deborah McKlemurry of McEwen

He is preceded in death by his brother, Daniel Lane, Maternal Grandparents, Carter & Nugie Wallace, and Paternal Grandfather, Marion Lane.