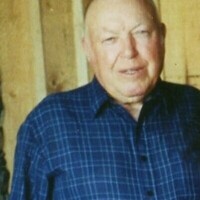 Mr. Donald Ray Schrock, age 91, of McEwen, TN, passed away on Monday, December 6, 2021, at Humphreys County Nursing Home in Waverly, TN.  Mr. Schrock was born on March 10, 1930, in McEwen, TN, to Noah Simon Schrock and Bertha Mae Dunn Schrock. Mr. Schrock was a member of the McEwen Church of Christ, the Humphreys County Farm Bureau, and American Legion. Donald was a veteran and proudly served his country in the United States Army during the Korean War.

Visitation for Mr. Donald Ray Schrock will be on Wednesday, December 8, from 4-8 PM and Thursday December 9, 2021, from 10 AM until the service beginning at 1PM, at the Luff-Bowen Funeral Home in McEwen. Adam Winters and Bro. Jim Suddeath will be officiating the service. Interment will follow at the McEwen Cemetery in McEwen, TN.

He is survived by his: