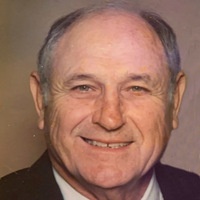 Ed was born, raised and schooled in Waverly, Tennessee where he was the high school class valedictorian.  A 1950 magna cum laude graduate of Vanderbilt University, he was a member of both Phi Delta Theta fraternity and the varsity basketball team, and earned a Master’s degree in Chemical Engineering the next year.  He subsequently worked with several large oil and gas companies and served in the U.S. Army. In 1956 Ed married his high school sweetheart, Margie McKeel.  They began their married life in Calvert City, Kentucky but soon returned to Waverly to raise a family, and Ed joined his father in the family business, Tate Lumber Company.

Ed was a three sport athlete in high school, an avid lifelong golfer, playing well into his eighties, and a fan of all Vanderbilt sports.  He was fun-loving, gregarious, humble, generous, smart and always happy.  His friend group was large and diverse, and encompassed all ages.  He was a devoted husband and father, and was always available for and joyfully involved in the lives of his children, grandchildren and great grandchildren.  An inspiration to friends and family, he will be missed.