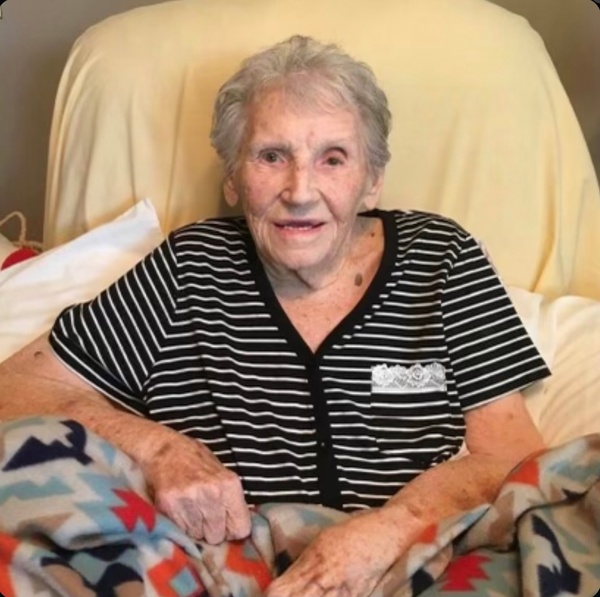 Mrs. Gladys Kennerly Gill of McEwen, Tennessee passed away into the glories of Heaven on Saturday morning, July 2, 2022.   She was the youngest daughter born to Emmit and Nora Mae Sizemore Kennerly, on the family farm near Big Richland Creek on the cold Thursday evening of February 10, 1927.
A witness to history, her life spanned over seventeen presidencies. Growing up during the depths of the Great Depression, she lived in a house without running water or electricity, but overflowing with love and adoration.  After church one Sunday afternoon in December 1941, she listened alongside her Mother, Daddy, sister Louise, brother Robert (“Charlie”), and various neighbors, to reports coming from her Daddy’s new Zenith radio, of an attack on Pearl Harbor. Thereafter she witnessed and endured the impacts of World War II.  She graduated as a proud member of the McEwen High School class of 1946, and continued to wear her class-ring well into her nineties.
She met and married the handsome Truman W. Gill upon his return from service in the South Pacific in the U.S. Army.  Together they had two daughters and six sons: Helen Taylor (widow of the late George Taylor) of McEwen; Mabel Sanders (Larry) of Hurricane Mills; Michael Gill (Carol) of Waverly; Brent Gill (Jane), Brian Gill (Cheryl), Steve Gill (Lori) each of McEwen; Kerry Gill of New Jersey; and Russell Gill (Heidi) of Nolensville.   She is survived by her eight children, fourteen grandchildren, fourteen great-grandchildren, and a host of nieces and nephews.  Her children proclaim that she was the perfect example of Psalm 31:28.
Mrs. Gill was a retired state employee of the Tennessee Dept. of Human Services in Waverly.  She invested her career in assisting the neediest of our county to obtain food stamps and other necessary social services.  In so doing, she lived out the teachings of Matthew 25:40.
She was a faithful member of Immanuel Baptist Church in McEwen and served as the church’s treasurer for nearly 35 years.  She loved to sing hymns and read her Bible.  Now, she is singing amongst the Heavenly Host, for all eternity.
Mrs. Gill enjoyed sewing and crocheting.  She was an avid observer of the political scene and lived through 17 presidencies.  She enjoyed keeping up with news of the day by reading several papers and watching various news channels.  Mrs. Gill was a member of the VFW Auxiliary, and ardent advocate for our nation’s veterans.  She enjoyed sitting on her porch, waving and speaking to friends and neighbors.  She treasured visiting with all who came through the doors of her longtime home at the corner at College and Railroad streets.  “Miss Gladys” as she was affectionally known by many, was dearly loved by everyone.
Visitation with the family will be at Luff-Bowen Funeral Home in McEwen from 9:30 am until 12:00 pm on Tuesday, July 5, with burial to follow alongside her beloved late husband, in the McEwen Cemetery.
To order memorial trees in memory of Gladys Kennerly Gill, please visit our tree store.