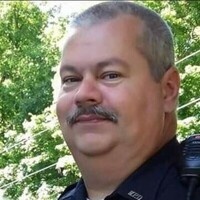 Mr. Gregory Lynn Triplett, age 50, of Waverly, Tennessee, passed away September 26, 2021 at Three Rivers Hospital in Waverly, TN. Greg was born on October 12, 1970 in Dickson, TN to Norman Triplett and Helen Catherine Warren Triplett. Gregory was a Patrolman for the Waverly Police Department and has worked in law enforcement in Waverly, TN since 1989. He was the SRO Officer for Waverly Central High School and also taught Criminal Justice there for 9 years. He enjoyed hunting, fishing, and collecting model cars. But most of all he enjoyed spending precious time with his family who meant the world to him. He married Lora Stewart and together they had 5 children.

He is preceded in death by his parents, Norman Triplett and Helen Catherine Warren Triplett, brothers, Donnie Dabbs, Butch Dabbs, Mike Triplett, and an infant brother.

Visitation for Greg will be held on Wednesday, September 29, 2021 from 4:00pm until 7:00pm at Luff-Bowen Funeral Home in Waverly and on Thursday, from 10 am until Funeral Service time beginning at 2pm. Retired Chief David Daniel, Chief Grant Gillespie, & Tony Ahne will officiate the service. Interment will be at Stewart-Triplett Family Cemetery.