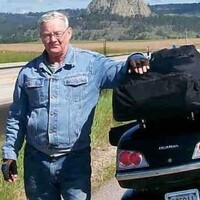 Mr. John Beecham, age 79, of Erin, TN, passed away on Monday, August 16, 2021, at his home.  Mr. Beecham was born on September 15, 1941, in Erin, TN, to John Louis Beecham & Dolly Mae Dennis Beecham.  He was a retired mechanical engineer for Community Hospital in Indianapolis, IN.  John served in the United States Navy from 1958-1965.  He served on the USS Independence CV-62 and was a Vietnam era veteran, serving during the Cuban Missile Crisis. John  was a member of the American Legion – Erin Post #73, National Rifle Association, Bass Anglers Sportsman Society, North American Fishing Club, North American Hunting Club, Aircraft Owners and Pilots Association, & he was a motorcycle enthusiast who traveled from coast to coast.  He enjoyed riding his motorcycle, skydiving, boating, fishing, hunting, & metal detecting. The accomplishment that he was the most proud of was being a dad and Grand “Pa”.

He is preceded in death by his parents: John Louis and Dolly Mae Dennis Beecham & his sister: Clara Lee Rye