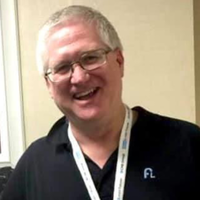 Kenn was born January 13, 1965 in Memphis, TN and went to his eternal rest on June 13, 2020 at his home in Tampa, Florida. He was the first son born to his mother and father, Gloria "Deanie" and Kenneth Bradley of McEwen, TN who survived him. He married Shannon Weisemann Bradley of Tampa, Florida who also survives him.

When Kenn was nine years old, the family moved to Tampa, Florida where he lived most of his life. Kenn graduated from Tampa Jesuit High School and later from Loyola University in New Orleans, LA with a Bachelor's Degree in Communications.

After graduating college, Kenn began his career in television, working for a short time for a TV station in Sarasota, Florida. He then went to work for Home Shopping Network in St. Petersburg, Florida as a Director and Producer for the various people who sold their products on TV. One of his favorite people who appeared on shows he worked was Movie Star, Maureen O' Hara. After several years with HSN, he and his college pal, Gene May formed their own company Florida Footage which produced various films for Companies, Art Conventions, Schools, Weddings, and other events. Kenn also worked at various times during seasons with the Tampa Bay Lightning, National Hockey League and the Tampa Bay Buccaneers, National Football League's stadium scoreboards.

Survivors in addition to his wife and parents include:

Funeral Mass for Kenn Bradley will be at St. Patrick Catholic Church in McEwen, TN, on Saturday, June 20, 2020, beginning at 1:00 PM. Interment will follow at a later date in the St. Patrick Cemetery. Father Zack Kirangu will officiate. Date and time of Interment will be announced as information becomes available.

In lieu of flowers, the family asks that donations be made in memory of Kenn to the St. Patrick Catholic School in McEwen, TN.
St. Patrick School
175 St. Patricks Street
McEwen, TN 37101

If you wish to leave your donation at Luff-Bowen Funeral Home, we will gladly forward it for you.