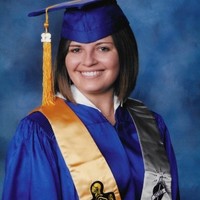 Nicole Alexis Moore, age 25, has escaped the earthly bonds of struggle and returned to her heavenly home.  Nicole was a life-long member of St. Patrick’s Catholic Church and served as a sacristan and volunteered at the St. Patrick’s Irish Picnic Duck Pond following in the footsteps of her parents, grandparents and entire Tarpy family.

She graduated eighth grade from St. Patrick’s School, excelling in math and science.  She graduated Waverly Central High School in 2012 as Valedictorian, member of National Society of High School Scholars and Humphrey’s County Vocational Center Outstanding Student.  She was active in many organizations including Marching and Concert Band, Beta Club, FBLA, Environmental Club, PAWS, Student Council and Jr Civitan.  She was elected Senior Superlative-Most Intellectual and Senior Homecoming Attendant.  She attended Austin Peay State University and was a member of the Honor Society and Alpha Delta Pi Society.

Visitation will be at Luff-Bowen Funeral Home in McEwen, TN, on Friday, November 15 from 3-8 PM with Rosary service at 7 PM.  Funeral Mass will be held at St. Patrick’s Catholic Church in McEwen, TN, on Saturday, November 16, at 10:00 AM.  Father Zack Kirangu and Father John O’Neill will officiate the mass.  Burial will be immediately following the service at St. Patrick’s Cemetery.  Serving as Pallbearers will be Bill Tarpy, Steve Tarpy, Lynn Tarpy, Tommy Fambrough, Tommy Hooper, and John Loudermilk.  In lieu of flowers, donations can be made to St. Patrick’s School-Nicole Moore Scholarship.