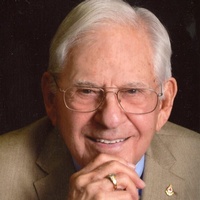 A celebration of life will be held on Friday, June 14, 2019 in the Waverly United Methodist Church for Richard Carroll Rose. Mr. Rose, age 90, passed away May 1. Pastor Thad Collier will officiate the service. Internment will be in Richlawn Cemetery, with arrangements under the direction of Luff-Bowen Funeral Home.  Visitation and service times for Mr. Rose will be Friday June 14, 2019 from 4:00 PM until service time at 6:00 PM. There will be a Private Graveside service for Family on Saturday June 15, 2019 at 9:30 AM at Richlawn Cemetery in Waverly, TN.

Mr. Rose was born on November 9, 1928 in Piqua, Ohio. He was the only child of Charles Francis Rose and Helen Saunders Rose. With his father supervising the installation of interstate telephone lines in the US  for Bell Telephone, the family moved often. This sparked the sense of adventure that Mr. Rose cultivated with his own family; never shying away from a new opportunity or a wonderful road trip. He graduated from high school in Waukon, Iowa, and it was only a few years later that he met his future wife, Gloria Crawford . They married on November 11,1950 and were together for nearly 65 years until her death in 2015.

Mr. Rose’s professional career began after serving in the Army. He was stationed in Fort Riley, KS during the Korean War where he was trained as a sharp shooter, served as a draftsman and was later promoted to the rank of Sargent. Upon discharge, Richard began work as a lineman in Indiana, made subsequent moves to both Colorado and Illinois to work for large electrical cooperatives and ultimately decided to start his own business as an electrician near his parent’s home in Iowa. Seeking more work-life balance brought Mr. Rose and his family to Waverly in 1970. He worked with Meriwether Lewis Electric Cooperative as a public consultant and advisor for many years , served as VP of Global Lagging for 3 years and ended his professional career as an electrician for TVA. He and Gloria retired in 1993 to spend precious time with  family and friends. They loved to golf, and Richard could often be found in his basement shop working on projects for the beautiful home that he and Gloria built together. After Gloria’s death, Mr. Rose cherished his time with his friends from the Gideons and his time worshipping at and serving the Waverly United Methodist Church.

Mr. Rose is preceded in death by his parents and his wife, Gloria. He is survived by his four children, David Rose (Paula) of Waverly; Carroll Coplin of Alpharetta, GA; Jeanne Cousens of Johns Creek, GA and Sher Kelly of Maryville, TN. He is also survived by 8 loving grandchildren and 3 great grandchildren