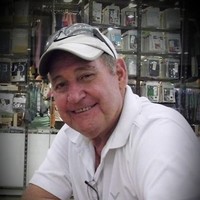 October 29, 2019, at the age of 75, Robert McKeel Bone, better known as “Bob”, received his final call for a boarding pass to his ultimate destination. If Bob has his way, he will negotiate a few adventures and stops along the way as traveling was his passion.

On February 20, 1944, Bob’s mother and father, the late Opal Dodson Bone and Robert Sam Bone, welcomed the first of their four energetic, boisterous, rowdy and rambunctious boys, Robert McKeel Bone, aka better known as “Bob”. Bob would soon welcome his three younger brothers, Sammy, Dwight and the late Jeffry to join him in creating a life of memories and shenanigans at their home in beautiful Cherry Bottom. Cherry Bottom is one of the most beautiful places on earth, but with the four Bone brothers, it probably wasn’t very peaceful for quite a few years due to the mischievous ways of four boys, such as when they played chicken with the tractors. Sammy could probably provide the details on that one.

Bob graduated from Waverly Central High School in 1962...although probably not with honors. However, the life lessons and love of growing up on a farm did take root and God Made a Farmer. From the time he was a child he was driving tractors and planting and harvesting along with his dad and brothers. He was the first person from Waverly to get his State FFA degree. He later pursued his career in agriculture when he got an Ag Degree from APSU in 1968, still no honors, but hey, a degree was good! In December of 2008, Bob retired from USDA Farm Service Agency with 26 years of service as the County Executive Director for Humphreys County.

Bob was perhaps best known for his lack of patience during planting and harvest time, but especially while driving, not holding back on his opinion, and a knack for telling it like it is. If he didn’t say it, you still knew by the shake of his head. If you didn’t want his opinion, well that really wasn’t an option, he was going to give it anyway.

Bob was a life-long UT Vol Fan and a dedicated and loyal season ticket holder for many years. He should have had them as pallbearers so they could let him down just one more time.

Bob loved to plant a seed in the garden and watch it grow to harvest and he also loved fishing, but only if it wasn’t too hot outside. However, his greatest love and joy in his lifetime was time well spent having fun, sharing laughter and making memories with his loving, though somewhat dysfunctional, yet always loyal, family. The late Alicia (Tim) Mayberry was the first of his tribe, with three more that would follow soon after – Terri (Brent) Fussell, Barbie Twyman and Brandon Bone. With four little ones, there were stepping stones along the way and much to be learned. He always had words of encouragement, sometimes comfort, and did his very best to be a good dad and raised them to be genuinely good people. He taught the ‘school of hard knocks’ and gave them a legacy to pass along to his 8 grandkids and 5 great-grandkids.

In 2001 Bob’s love of farming gave way to his joy and love of being a Grandad and he sold the farm. With being a Grandad came a patience and love he thrived in, taking walks through town with grandkids in strollers to get an ice cream before dinner!

If you knew Bob at all, then you know of his love for cooking and sharing a meal. His specialty was good ole’ southern soul food and his best dish, according to his grandkids was his “Grandaddy Beans” (white beans) and a pan of his perfect cornbread. He was precise in the time it took to boil corn, no more than 8 minutes, or it was ruined. His hamburgers and steaks he liked “rare”, in truth, barely warm. His favorite was a big fish fry!!! Probably because it brought more people to the table. And if you missed out on one of his scrumptious hushpuppies you missed the opportunity of a lifetime!

To his “crew” and you know who you are....if you’re wondering if this applies to you....then it probably does. Bob believed whole heartedly you all grew up in the best of all times in the history of America. The best music, muscle cars and cheap gas. Thank you for being a friend and giving him all the fun times, all the great memories and the incredible remarkable adventures that made his life extra ordinarily blessed! It wouldn’t have happened like that without you. He truly loved his “Crew”.

Bob left this life for his next adventure thankful and knowing he lived an abundantly full and blessed life because of the people who helped write and were a part of his story. He traveled to every place on earth he ever wanted to go, had every job he ever wanted, and a few he didn’t. He ate everything he wanted to eat. He died just as he lived; he wrote his own rules. He didn’t take kindly to advice he didn’t want to hear and if you told him he couldn’t do it, by golly he’d make sure he did.