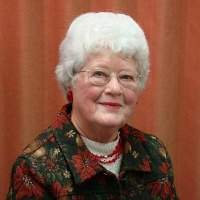 Mrs. Roberta “Bobbie” Anne White Robertson, age 93, died on Monday, July 15, 2019.  She was born on July 4, 1926, near Hurricane Mills, Tennessee, on the Link Farm on Forks River Road.  She was the daughter, and only child, of Robert Parker White and Annie Laniece Anderson White.

When Roberta was about three years old, the family moved to the Nolan Farm on West Blue Creek Road.  While living there, she began her school career by attending Pleasant Hill School, a one-room building in which all eight grades were taught by Mrs. Pearl Warden.

In 1932, her father was elected Trustee of Humphreys County and in December of that year the family moved to Waverly.  Roberta spent the remaining years of her life on West Main Street in Waverly, except for the time she was attending college in Nashville and her husband was attending a summer seminar at Florida State University, Tallahassee, FL.

Roberta graduated from Waverly Grammar School in 1939 and from Waverly Central High School in 1943.  She attended David Lipscomb College, then a two-year school, 1943-45, and then returned to Waverly and worked as bookkeeper at the National Store for one year.  In 1946, she enrolled at George Peabody College and received the B.A. Degree in 1948 and M.S. in Library Science degree in 1952.

On December 26, 1948, Roberta married Delmas Truman Robertson., who died in 2007.  Although they had job offers at other places, they opted to accept positions at home in Waverly and never regretted that decision.  She was employed by the Humphreys County Board of Education.  In 1976, she retired and spent the remaining years of her life as a homemaker.

Roberta and her husband enjoyed traveling hiking in the Great Smoky Mountains, and following their retirement, attending Elder hotels at educational institutions from Pennsylvania to Alaska and several Summer Hostel programs at Lipscomb University in Nashville.

Roberta served as the music director of the Three Rivers Dulcimer Association for about 20 years.  In addition to conducting workshops and weekly practice sessions, she also taught beginning players in her home and prepared most of the music used by the group of players.

In her later years, she taught adults who were either learning or re-learning the Spanish language.  She occasionally served as a teacher for the Wednesday Morning Ladies’ Bible Class at the Waverly Church of Christ.  Between 2009 and 2014, she made five mission trips to El Salvador with other members of that congregation.  She loved the people of El Salvador – especially the children and the visits to Jungle Snow for ice cream.

Although she had no siblings or children of her own, Roberta is survived by several cousins and a host of friends, all of whom she loved and appreciated very much.  It was her hope to be remembered as an encourager and a Christian example for others.

Visitation with the family will be on Saturday, July 20, 2019, from 10:00 AM until service time at 2:00 PM at Luff-Bowen Funeral Home in Waverly, TN.  Jeff Keele will officiate the service.  Interment will be at Richlawn Cemetery in Waverly, TN.

In Lieu of flowers, donations may be made to Waverly Church of Christ missionary efforts in El Salvador or to the charity of your choice.