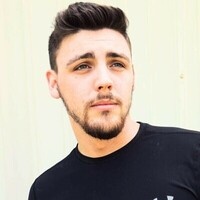 DUE TO INCLEMENT WEATHER, FUNERAL SERVICE FOR FRANKIE MELTON WILL BE AT 1pm Saturday, MARCH 12th WITH VISITATION TO FOLLOW.
SSgt Dennis "Frankie" Melton
The Man, the Myth, the Legend
After a childhood of constant moves and new homes and schools, Frankie came to the town of Waverly, TN.  From the age of 12 until he graduated high school, he lived and grew up through the help of many people.  It was this playground where he spent most of his days.  He found life long brothers and sisters there and was welcomed into the Bancroft family; his home for over half his life.
He wreaked havoc upon the town with his “family” of brothers and sisters for many years, but it wasn’t until he went to college he found his life long foe…heavy things.  His love for the gym and angrily picking up and throwing down heavy things became his life long passion.  After gaining knowledge and doubling in size he looked for new places to grace with his presence.
The United States Air Force became his next target. It was here where he showed his true talents of leading by example and spreading his knowledge. His ever growing ability to lead allowed him to cut his own path with his new group of marauders in the land of Shaw AFB.
During his time upon this land, he proved to be the loyalists of friend or the fiercest of enemies. To those he loved, he bore a marking upon his side that expressed his soul "Family's not always Blood"
He has now ascended to his final place of enlightenment to watch over those left behind.  It is here where he will guard over all those he loved.
He will be mourned by women, children, and men throughout the land. He laid a path of love and caring along the way.
In Lieu of flowers the family requested that donations be made to the Waverly Animal Shelter in Waverly, TN or the Folds of Honor foundation.

Frankie the hero will always be remembered, but the legend of Frankie continues on.