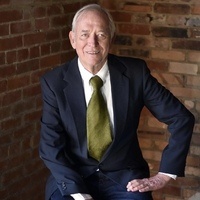 Waverly, Tenn./Nashville, Tenn. – Terry Ray McFarland, born November 29, 1949 in Florence, Alabama to Rebecca and Noel McFarland, died on May 3, 2021 at age 71. An only child, Terry never really liked being alone. In childhood he even created an imaginary friend, Roger, before meeting his real friends in grade school in Waverly, Tennessee – companions who would turn into lifelong friends.

One such friend described him as “a gentleman, sometimes too gentle for the world we know.” Noting, “Thank goodness he’s always had a sense of humor that served as an antidote against the wicked and the absurd.”

After a grade school love letter was intercepted and read aloud to the class – only to be signed via a little cartoon mouse character, not as Terry – his nickname “Mouse” was born and stuck with him throughout his life.

Mouse was the lead singer in his high school band, Third Day Chase, before moving to East Tennessee to attend the University of Tennessee, graduating with a bachelor’s degree in Fine Arts in 1973. He obtained a master’s degree at the University of Kentucky in Lexington in 1975.

Spending the better part of his life in and out of Waverly, he married young, divorced, and married again to Lynne Luckey McFarland, his wife of more than 20 years. Together, they have a daughter, Mary Elizabeth (Ebie), who currently lives in Nashville, Tennessee with her husband, Jon-Paul Bruno, with whom Terry stayed in the final months of life after being diagnosed with lung cancer in early February 2021.

When Terry and Lynne moved back to Waverly in the spring of 1982 with Ebie, the family settled into a lake neighborhood on Dry Creek Road where sail boating, barbequing, fishing, and listening to music way too loud became the way of life for them and their family of neighbors. Many a bonfire led to some of the best storytelling in the South and playlists included Rolling Stones, The B-52s, The Clash and more that would continue to serve as the soundtrack of his life. During business hours, Terry ran The Print Shop which handled everything from Bill Collier Auction flyers to Waverly Central High School homecoming programs.

Terry sold the lake house and print shop in the late 90s to begin a career as a real estate agent in Kentucky before returning to Waverly in the mid-2000s to care for his mother, Rebecca “Bec” McFarland, aka “The Cookie lady,” aka “Sweetie,” in her later years.

Regardless of profession or location, year or time of night, there were a few ever-present constants in Mouse’s life: true friendship, great storytelling and a profound love of art and music. In his last days he enjoyed listening to Eric Church, David Bowie, Brandi Carlile and Kacey Musgraves on vinyl and while he was still feeling well, painting acrylics on canvas with daughter Ebie.

He was grateful for the friendships and support of many people, especially Louis and Carla Flexer for managing his social calendar; Sheila Lofton for her encouragement and support; Chancey Turner for being a source of laughs and lightheartedness; Rick Logan and Sonny Collier for reminiscing and reminding him of stories long forgotten; for cousin Wanda Sexton who showed constant support from family in Big Rock; James “Mick” Horn for the words of encouragement and reflection; Mac and Vicky Dodson for always answering their phones to help; Christi Webb Schmitt for her nursing and adventurous driving skills; Allison Stewart for her constant generosity and boots on the ground approach; Meghann Zolan for the back-up support, endless snacks (minus weird-tasting supplements), terrible wheelchair driving and positive reinforcement; Lynne McFarland and Newell Anderson for the conversations, camaraderie and counsel; Carla Lee for always keeping him stocked with banana bread; and Crystal Ladd for her care in keeping his space tidy and comfortable. To Dianne Macconi and Jannah Dotson; Phil, Denise and Tyson O’Guin; Debbie and Mike Turner, and so many others who checked in on his health and well-being constantly. To Deanna Bruno, thank you for worrying about his health when he would not. To his Neighborhood Realty family, he rested well knowing you all were there to support him and help people find their homes when he could no longer do so. To Tracy and Dennis “PeeWee” Dreaden, thank you for going above and beyond and first notifying us of the need for him to seek medical attention; to his attorney Scott Daniel for helping him feel at peace as he faced end of life decisions head-on. And to his phenomenal physicians, Dr. Dickie Jackson of Waverly, Vanderbilt Medical’s: Dr. Christien Kluwe, Dr. Jami Miller, APRN Sam Robbins, Dr. Evan Osmundson and last but not least, the incomparable Dr. Christine Lovly who supported his journey from diagnosis through his final days. To

the late, incredible Phran Galante and her husband Joe, thank you for connecting the relationship of his diagnosis with Dr. Lovly’s research and work in lung cancer. Special thanks to Dr. Leah Cordovez and Umaru Jutte for bringing him so much comfort and treating him like the ultimate VIP with bedside care, and to the teams at Amedisys and Touching Hearts for being wonderful helpers to him. To his son-in-law Jon-Paul Bruno, you wore hats as a chef, trainer, supporter and staunch protector of his health and well-being. Thank you.

Terry is preceded in death by both his mother and father, aunts, uncles and cousins as well as his third wife, Brenda Kay McFarland.

Terry Ray “Mouse” McFarland will have a memorial service in the coming weeks – details to follow. In lieu of flowers, please consider donating to VUMC Gift and Donor Services, c/o Dr. Lovly Research on behalf of Phran Galante.

Please email memories and/or photos from the years to his daughter, Ebie McFarland, [email protected].

Thank you all for loving Mouse unconditionally.

May we all live by his mantra, “You gotta laugh!”